The work of Helmut Newton is closely linked to the history of Kicken Gallery. From 1989 until 2000, the gallery represented Newton's work worldwide and thus consolidated his debut on the international art market. On the occasion of Gallery Weekend Berlin, Kicken Berlin presents a very personal selection of the native Berliner's oeuvre. A unique and rarely seen body of work from an important American collection will be on view: a selection from the various series Newton created in the 1980s and 1990s for Playboy magazine. In addition, Big Nude III (Henrietta) (1980), a striking piece from the iconic Big Nudes series, and other important works like Aria at the Negresco, Nice (1976) or Pension Dorian, Berlin (Jenny Kapitän) (1977), which today seem to genuinely embody the image of a new, strong type of women, will be on display. Berlin's interwar elegance, which Newton experienced in his early years, laid the foundation for his signature style. A notion of old-school, yet tongue-in-cheek courtoisie resonates in the artist's addressing women in German as “Fräulein” (Miss), which has become the title of the new show. The title aims to describe how Newton gave distinction to the sophisticated nude, be it in his 1970s and 1980s fashion icons, the towering, life-size nudes or the mildly mocking 1980s to 1990s Domestic Nudes. These images of nudes grew consistently out of fashion and advertising photographs. They were often taken alongside commercial photo shoots at certain locations - for example, luxury hotels or nighttime city streets - when he found time for his own independent work. Newton worked with professional models as well as with amateurs and preferred the “real” people of Los Angeles or Berlin. The photography Playboy magazine commissioned for over thirty years from the grandmaster of eroticism, an outstanding body of work, has been published and exhibited only rarely. Playboy's success is inseparable from ist photography, and Newton was an important part of that. With an eye for enigmatic tableaux vivants and secretive, disturbing atmospheres, he lent the usual centerfold new dimensions. Whether in the Hollywood Hills (one of the best-known sites on the American West Coast) or cultivated Parisian interiors, Newton tirelessly staged his sensual narratives. He was quite particular in his preparations, especially in choosing models, and had his own ideas of creating series. In doing so, he realized his own, singular visions, often stretching the bounds of others' imaginations. The Playboy works allow insights, too, into the making of the nude stories, which are of decidedly sequential, almost cinematic character. This becomes apparent in images like the 1987 sequence on foot of the signature Hollywood sign or the diverse 1998 “street” scenes in front of small-town backdrops, in which the Newton Girls pose stretched out in the street, standing tall or swinging on and descending from the bars of a forklift. There is even Newton's own wry take on Nude Descending a Staircase. A number of photographs attest to the fact that Newton shot both in color and black and white, the latter being his preferred style. From the first memo (Newton used to conceive every scene in short notes) to the printed page, the unpublished Playboy work manifests the continual work in progress of meticulous staging and manifold variations. Publisher Hugh Hefner recalls Newton as being an attentive and arduous observer who found an ideal playground at the parties and movie nights at the Playboy Mansion. Of traditional European upbringing himself, Newton was fascinated with the new worlds that unfolded in the American West, from the staging and props of the film industry's dream worlds to poolside or club locations. In a sense, he enjoyed Playboy commissions as a carte blanche for visualizing erotic fantasies he was unable to incorporate in restricted fashion commercials. Gary Cole, Playboy's longtime director of photography, quotes Newton often as accepting commissions with the comment, “Let's try something a little kinky this time.” 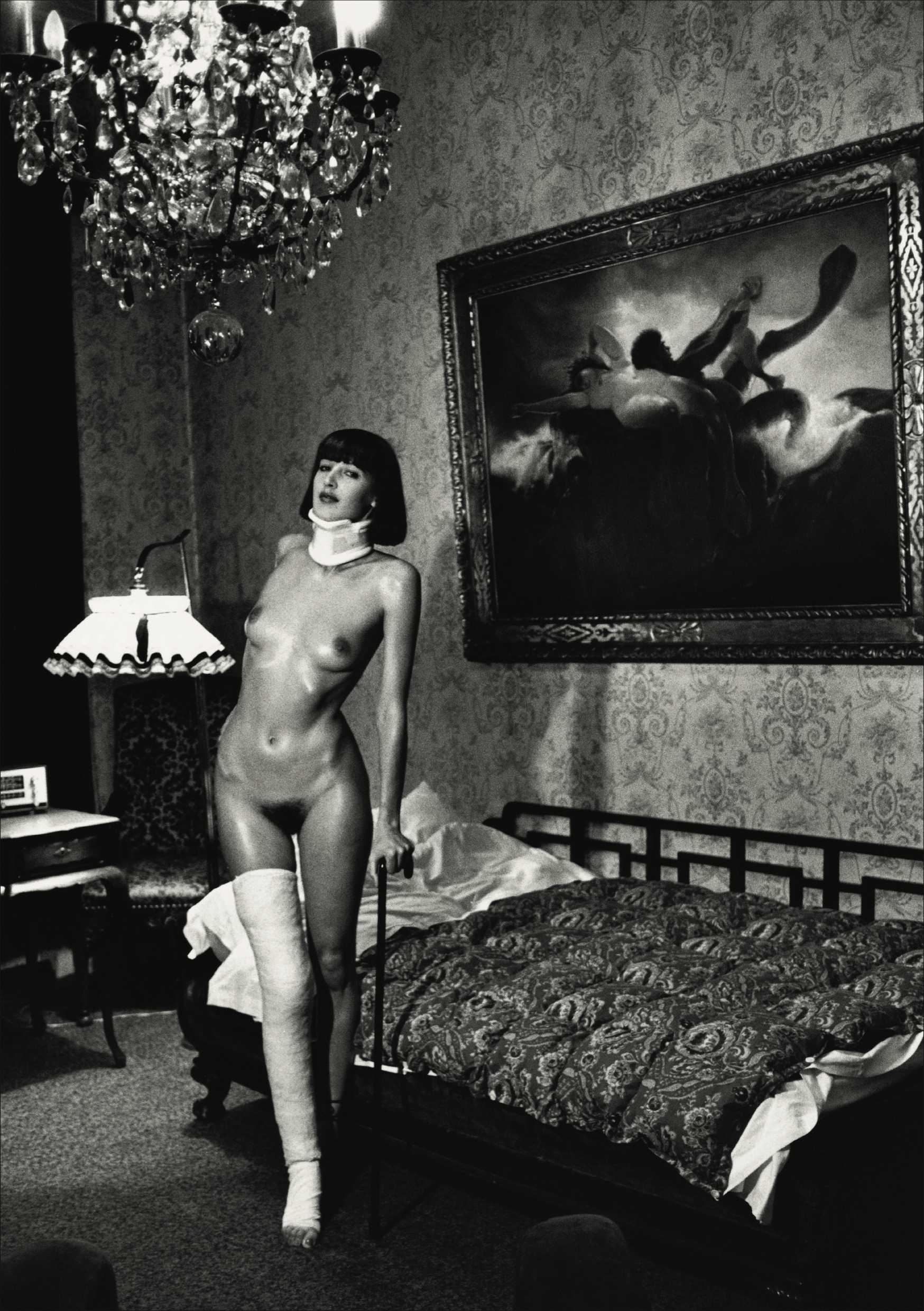