On display at Kicken I is a body of work by photographer JOACHIM BROHM (born 1955). This photographer is still considered an insider tip even among experts of contemporary German photography. Discovering Brohm’s work in this exhibition of various picture series highlights this photographer’s importance and high ranking in the history of both German and international photography.
Joachim Brohm was able to quickly transfer the visual language of late 1970’s and early 1980’s American color photography to his own environment and shape it, using his own visual means, into photographic perfection. Already working in color by the early 1980’s, he was one of the first artists in Europe to begin photographing in color. At that time, color photography was predominately used in advertisement and amateur photography and therefore considered commonplace and banal. It was not viewed as a serious form of artistic expression. But similar to William Eggleston and Stephen Shore in the US, Brohm combined documentary photography with color, intensively exploring both elements in his work.
Brohm shot the photographs titled simply “OHIO” while living there as a student in 1983/1984. The pictures show cluttered yards and houses along the street, or a burning car. These are pictures of an America that at the time was considered so everyday and plain that until the shutter was pressed, few would have considered these images worth photographing.
Finally, what makes the early work of Joachim Brohm so fascinating is that photographs such as these have influenced our image of the USA - as familiar as it may seem - more than we want to believe. Once again it becomes clear that even before the recognition that the Becher school received, there were strong positions in German photography that have not yet been granted the appreciation on the international art marked that they deserve.
Parallel to the Joachim Brohm show at KICKEN BERLIN, the Galerie für Zeitgenössische Kunst (GFZK) in Leipzig is honoring this photographer
with the exhibition “JOACHIM BROHM. OHIO” (from October 19, 2007 to January 31, 2008). A catalog produced in cooperation with the Josef Albers Museum in Bottrop, issued by the Steidl Verlag publishing house, will be published 2008.
At first glance, Joachim Brohm’s pictures, such as those from the series “RUHR” (1979-83), appear to have been casually photographed and mundane, as if they were taken without any concern for picture composition and point of view. Closer examination reveals how deceptive this first impression can be: all of the photographs are kept deliberately reduced, with a soft and low contrast color palette. They are, without exception, photographed in a restrained
documentary compositional style - often as if observed from an elevated point of view. In this way a panorama of the landscape emerges in which attention is deliberately not drawn to individual elements. The pictures are truly documentary photographs that present situations and moments of daily life without intervention or contrivance.
In “AREAL” (1992-2002) Joachim Brohm photographed (over a period of ten years) an industrial landscape undergoing major reconstruction north of Munich. This series of photographs consists of views that include both the torn down and newly constructed buildings together with scenes found at eye-level: a gas station over a decade, in the snow, in summer light, always changing; a close-up view of a rusted trailer; images of an oil-stained parking lot. Present in all of these pictures is a density of information about transiency: pictures showing fragments of development in progress - not dramatically staged with a beginning, middle and end – but rather a documentation, without revealing the bigger picture, of the everchanging “now”.
On display in the second exhibition space is an exquisite selection of works by EUGÈNE ATGET (1857-1927). Atget’s work acts as a wonderful counterpart to the photography of Joachim Brohm, for both explore the art of documentary photography and the possibilities it offers. (Mareike Stoll) 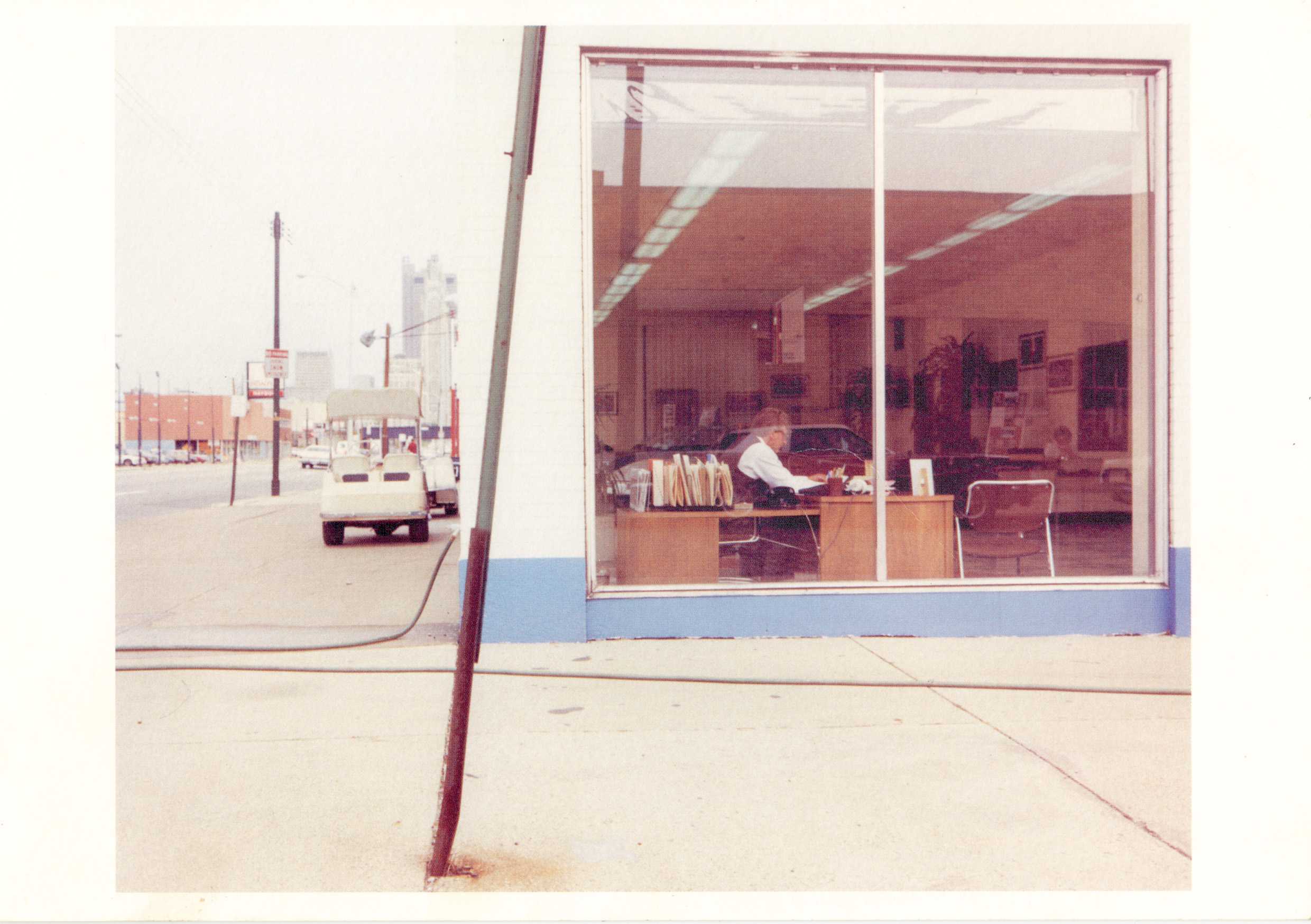