Life, Liberty, and the Pursuit of Happiness

For Gallery Weekend 2019, Galerie Klaus Gerrit Friese and Kicken Berlin co-curate the exhibition LIFE, LIBERTY, AND THE PURSUIT OF HAPPINESS with works by William N. Copley, Robert Frank, Saul Leiter and Saul Steinberg (on view at Galerie Friese on Fasanenplatz). With a common interest in everyday culture in America, the four artists each use different media—photography, painting, and drawing—to create a poignant portrait of a post-war society. The paintings of William N. Copley (1919–1996) revolve around sexual desire and depict a world of lust, intoxication, and the moral implications thereof in the ’50s and ’60s. Bridging European Surrealism and Pop Art, Copley’s work holds a truly unique position. Pieces from different complexes of work by Copley ranging from the 1950s to the 1990s are on view, which bear witness to the continuity and stylistic diversity of Copley’s cosmos. This includes his magazine S. M. S.—Shit Must Stop, in which Copley presented his contemporaries from Christo to La Monte Young. Robert Frank (born 1924) is one of the great innovators of documentary photography in the 20th century. He wrote photographic history with his radically subjective contemplation of The Americans in unadorned, rough and poetic images. With the eponymous publication in 1958, he revolutionized the aesthetics of the photo book. Frank was discovered by Alexey Brodovitch, the legendary art director, and photographed for magazines like Life, Fortune or Vogue until 1953. He travelled across the United States with a Guggenheim grant from 1955 to 1957 pursuing his project of a comprehensive picture series—what would later become The Americans. The Swiss-born artist explored the country by car with a fresh eye and a precise sensibility for the overlooked and unexpected—things that had never been seen and shown like this before. “(T)hat crazy feeling,” as the poet of the Beat Generation, Jack Kerouac wrote in his preface about the mysteriousness of daily life beneath the omnipresent American flag. Frank’s series was a statement on the American way of life—the street, the car, consumer culture, media and not least the people—from the wide-eyed perspective of a flexible “perception following chance” (Ute Eskildsen). And yet few, often dynamic shots, which were beyond all convention, sufficed for him to capture the very essence: “The photograph must be […] a confrontation with a power,” as Frank said in retrospect. Saul Steinberg (1914–1999), who became famous especially as an illustrator for the magazine The New Yorker and designed the cover of Frank’s The Americans, et al., narrated the dreams and nightmares of an entire generation of Americans in his virtuoso works. His unique style was influential and groundbreaking within the genre of drawing, breaking down the boundaries between illustration, cartoon and drawing; between high and low art. Along with drawings, the exhibition also includes collages by Steinberg. The painter and photographer Saul Leiter (1923–2013) is considered a pioneer of abstract, painterly, genre-busting photography. He captured impressions of vibrant street life in New York as well as shooting intimate studio portraits, including nudes that have only become public recently. Since the late 1940s, beside his commercial commissions as a fashion photographer, he created these tranquil pictures. Snapshots alternate with carefully composed images, resonating with the intimate mood of a personal connection. A silhouette, a gaze, a knee, an apparently carelessly opened blouse—Leiter looks at the young women with sympathy and empathy: there is no glamour or posing here, nothing bold. In contrast to Leiter’s abstractions of New York city life in color, the nudes decidedly foreground individuality, without the use of overly free formal composition. Beyond the categories of portrait and nude, these are studies of dense shapes, prototypical postures and gestures. Although these artworks have a quiet note, they mirror the freedom of art: the spontaneity of expression, the diversity of shapes, the transformation of reality into images—and not least the experience of realizing one’s own dream in the “land of opportunity.” Saul Leiter, who had traded the strict rules of his orthodox Jewish upbringing for this liberty, was true to it his whole lifetime as an artist. The exhibition is on view at Galerie Klaus Gerrit Friese, Meierottostr. 1, near Fasanenplatz. (Carolin Förster) 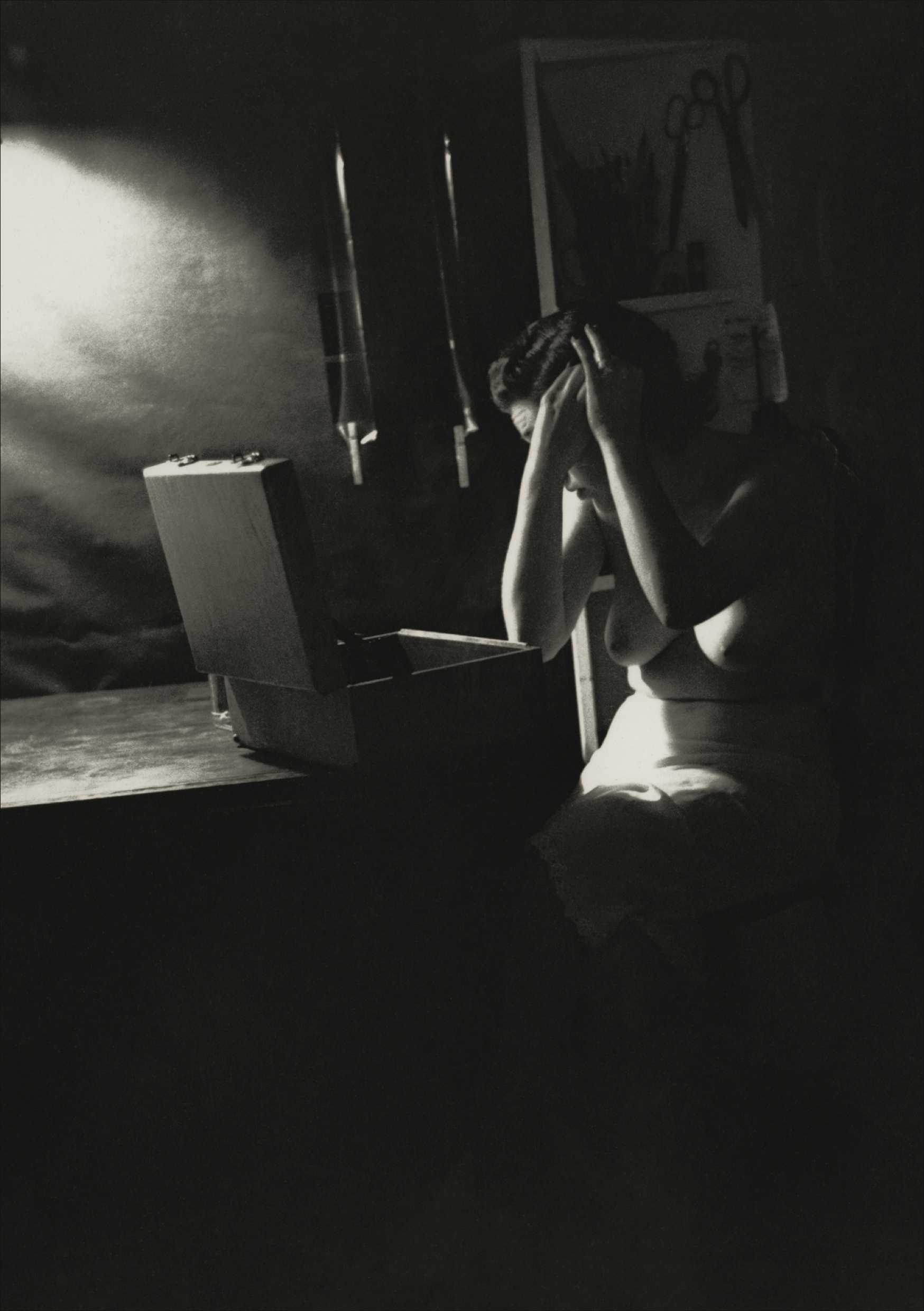