& Other Masters of Hungarian Photography

Gallery Kicken Berlin is presenting a retrospective with photographs of the renowned Hungarian novelist, storyteller and essayist PÉTER NÁDAS (*1942). Born in Budapest in 1942, Nádas completed formal training in photography in the late 1950’s. He worked until 1963 as a newspaper photographer after which he became a journalist. When the Warsaw Pact invaded Prague, he left journalism to concentrate on literature. Nádas’ images have a private and poetic character, a credit to his precise and sensitive talent for observation. Nádas’ subjects - people, cities, landscapes and interiors - are always directly or indirectly related to Nádas’ life and can be read as a kind of autobiography. For Péter Nádas, writing and photography probably have the same roots. His work is about sensuality towards the world as given, without the requirement of being compatible with any particular interests or without having to serve a utilitarian purpose – especially in a political sense. A stance that surely is related to Nádas experience with dictatorship. Nádas opens himself to people and to the world of material objects in his writing and photography, getting close and at the same time preserving the integrity of his subjects. One of Nádas’ books is titled "My Own Death" ("Der eigene Tod", Steidl Verlag, 2002). It contains over one hundred photographs of the very same wild pear tree, and a text about the heart attack he suffered in the middle of the street nine years ago at the age of 51. As part of their Nádas exhibition, Kicken Gallery is showing 42 prints from the Pear Tree Series, a chronicle of recapturing the real after a near-death experience. Nádas’ experience of death, his vision of light and of passage into the universe, was the equivalent to being reborn. It was a kind of reminiscence, according to Nádas. But the return to everyday life can be a difficult process.
The daily ritual of photographing the trusted and familiar pear tree in the changing light of the days and seasons helped him in this task. Photography proved itself to be a ‘realistic’ medium for Nádas. It helped him reestablish a connection that was lost, and affirmed the continuity of life in its perpetual change.
From the beginning, Nádas was fascinated with the demiurgical quality of light. This was apparent in his early photographs from the 1960’s. There are the many views from windows: looking outside onto city streets, into gardens and into the distant countryside. Scenes whose shape and character are actually brought about through the presence of the sun and clouds. And on the other hand, Nádas gives us observations from the inside of the window, the workroom and room walls, where the sun, with its patches of light and areas of darkness, defines the (living) space.
It was the pressure, or the “censorship” (Nádas) of current fashions that caused Nádas to turn away from a career in photography. This had the effect of making his personal photography seem more private and intimate. But his interest in people remained, and can be seen in his early portraits from the Hungarian countryside: orphaned children, farm workers, nuns and wedding guests. In the 1970’s during a stay in East Berlin, views of the Jewish Cemetery or of his room in Prenzlauer Berg were added. And during the 1980’s his camera captured the ordinary and the unmediated, for example an old abandoned wooden house he was staying in or the nearly deserted landscape surrounding the Hungarian village where Nádas lives today. Nádas comes very close to people and things in the way he photographs – so close that the images have the ability to touch the viewer. Accompanying the Nádas show, Gallery Kicken is presenting a wide-ranging overview of Hungarian photography, including some of Hungary’s most important photographers. The immense influence of Hungarian photography is due in part to the surprising number of greatly talented photographers who achieved worldwide recognition after leaving their homeland. Photographers such as László Moholy-Nagy, Márton (Martin) Munkácsi, Robert Capa, André Kertész, Brassaï and several others created works that have become classics in photographic history, regardless of their differences in style, intention and methods or if the work emerged out of Bauhaus circles or in Paris or New York. The term ‘Hungarian Photography’ doesn’t necessarily refer to formal similarities of any kind but can be understood instead to be a mark of quality. The enormous number of talented photographers from Hungary is amazing, and a history of photography would be unthinkable without them. Many Hungarian photographers had to leave their country in order to achieve recognition. The Bauhaus teacher László Moholy-Nagy was surely the most influential of them all, due to his comprehensive theoretical and practical work. In the 1920’s he was considered to be the most important figure in the ‘Neues Sehen’ (New Vision) movement. A few Hungarian Bauhaus students however created photographic works of nearly equal quality – for example Irena Blühova or Gyula Pap – as can be seen in the Kicken exhibition. Ernö Berda on the other hand, came to the attention of Moholy-Nagy in Bratislava. The classic André Kertész, who could turn a common fork into the epitome of elegance by means of his photographic talents, Robert Capa and his symbolic image of the fallen soldier, or Brassaï (Gyula Hálász), who captured the twilight world of urban life with great immediacy, are thought to be American or French by many people, even today. And many of the excellent photographers who remained in Hungary are still unjustly forgotten. Károly Escher’s photojournalism, Imre Kinszki’s animal photographs, Kata Kálmán’s impressive portrait studies or István Kerny’s sport pictures show that those who stayed home have no reason to shy away from comparison to the stars who emigrated. The selection of photographs at Kicken Berlin is a taste from the rich reservoir of these Hungarian master photographers. And also among those names widely unknown outside of Hungary are treasures waiting to be discovered. 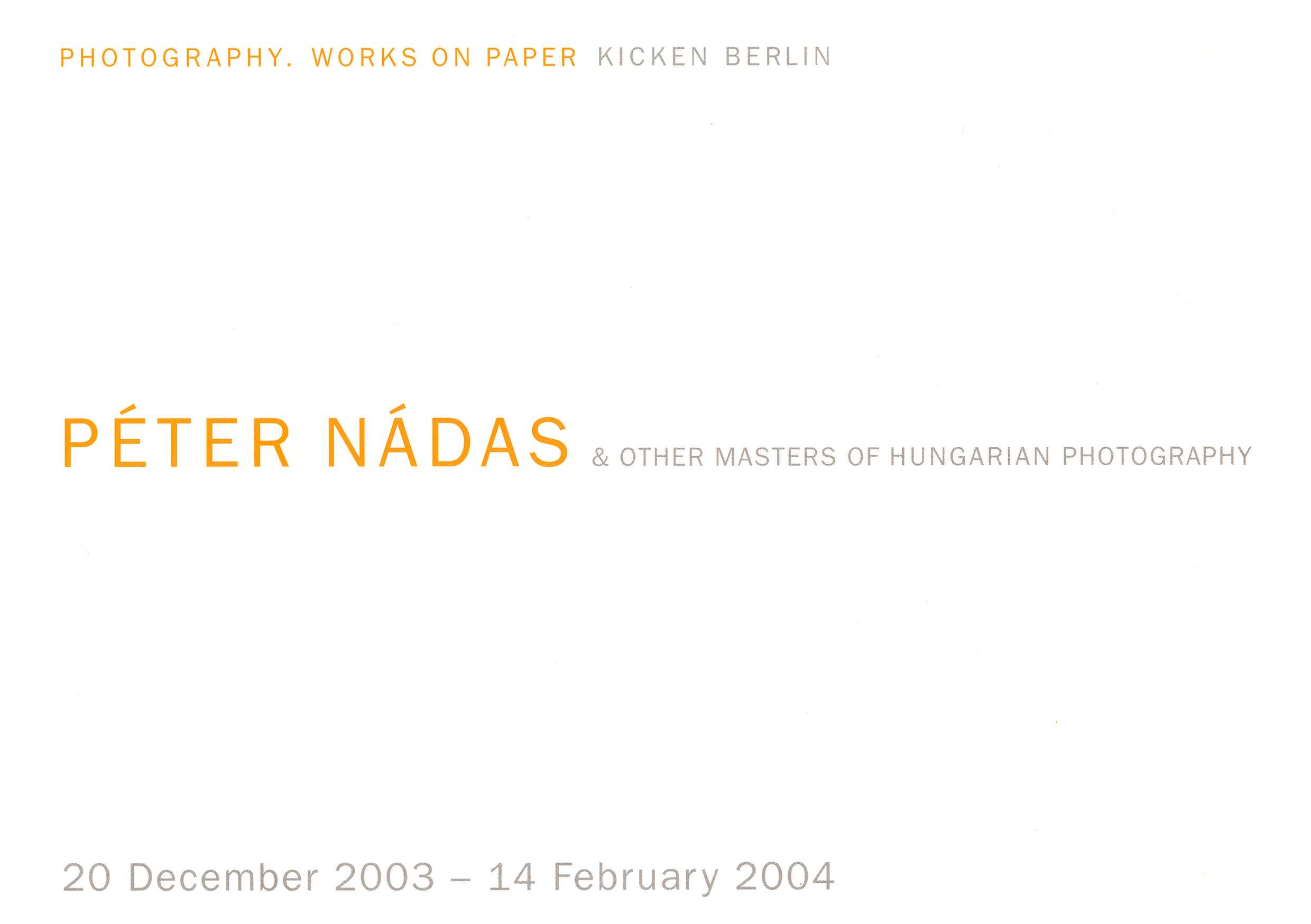