Kicken Berlin presents Ryuji Miyamoto. Pinhole and J. Mayer H. positive.negative in the Linienstraße 155 exhibition space, newly transformed by the J. MAYER H. Architects. Both photographer and architect integrate aspects of other art forms into their work and transcend the confines of their chosen medium. J. MAYER H. Architects opened their offices in Berlin in 1996. They work on the interface of architecture, communication design and new technology. The use of interactive media and responsive building materials play a central role in the way they create architectural space. In their design for Kicken Berlin, J. MAYER H. Architects architecturally modified the exhibition space in Linienstraße 155, allowing art to be experienced in a new way. A moveable, two-part element, positive.negative, creates transformable exhibition space. The usual, static conventions of gallery space have been rethought, opening it to exciting new art presentation possibilities that go beyond the white cube paradigm. Presented in this show room of his own design are J. MAYER H. sketches, architectural drawings, and animated architectural imagery that document the design process and give the viewer insight into the transformative possibilities of space. Also being shown are project sketches of other international designs by J. MAYER H. that have either been built or are currently under construction. These include Metropol Parasol, the redesign of a town square in Sevilla (begun in 2004); ADA 1, an office building (2005-2007) in Hamburg; and a number of interior design projects, including the Vitra Design Museum in Weil am Rhein (2006-2007). J. MAYER H.’s work has received numerous international awards and his projects can be found in art collections such as the MoMA’s in New York and the SFMoMA in California.
RYUJI MIYAMOTO (born 1947 in Tokyo) became internationally known thanks in large part to his photographs of ruins after the earthquake in Kobe city in 1995 (Kobe). Shown at the 11th Documenta in Kassel, the photographs of destroyed buildings with tilting facades and dangling balconies call into question the geometric designs that architects are intent on building. Although RYUJI MIYAMOTO’S new series Pinhole (1999-2004), with its luminous blue tones and unusual large format crosses, seems visually very different from the photos of ruins and cardboard houses, there is a conceptual link between these works. In Pinhole the photographer RYUJI MIYAMOTO combines the aesthetic intrigue of the dwellings made by the homeless (Cardboard Houses, 1983-1996) and the instability of supposedly durably-constructed buildings (Kobe 1995, Kowloon Walled City 1988, Angkor 1991) with the reflective properties of the photographic process. Using the emergency cardboard shelters built by the homeless as an example, RYUJI MIYAMOTO used board paneling to build a hut of his own that was just big enough to stretch out in. He made the hut into a Camera Obscura by drilling a small hole of only one millimeter diameter into an aluminum plate on the wall. The bundled light falling through the Pinhole projected an upside down, lifelike image of the outside world onto the opposite hut wall. Painters have been using Camera Obscuras since the 17th century to get reproductions of nature they could use as realistic, true-to-scale templates for their work. Just as the artists before him, RYUJI MIYAMOTO carried his hut camera directly out to the landscape he intended to document. To prepare the hut for shooting, the artist first blocks out all light coming from outside. He then covers the wall with light-sensitive photo paper and uses the precursor of all cameras to take his pictures. While his assistant opens the pinhole for 3-5 minutes to expose the paper, MIYAMOTO lies prone in the dark cave of his camera hut. After developing, a direct - albeit upside and reverse - reproduction of the outer environs appears on the print. The silhouette-like shadow figure of the artist reproduces as a photogram, and serves as a unique signature of the artist. RYUJI MIYAMOTO not only works on the line between photography, installation and performance, he also liberates the medium from its technical confines thanks to the time-intensive building of the camera hut and the direct to paper image exposure. All pinhole pictures are unique pieces, and they remove photography from the 'age of its technological reproducibility'. (Walter Benjamin).
(Claudia Wente) 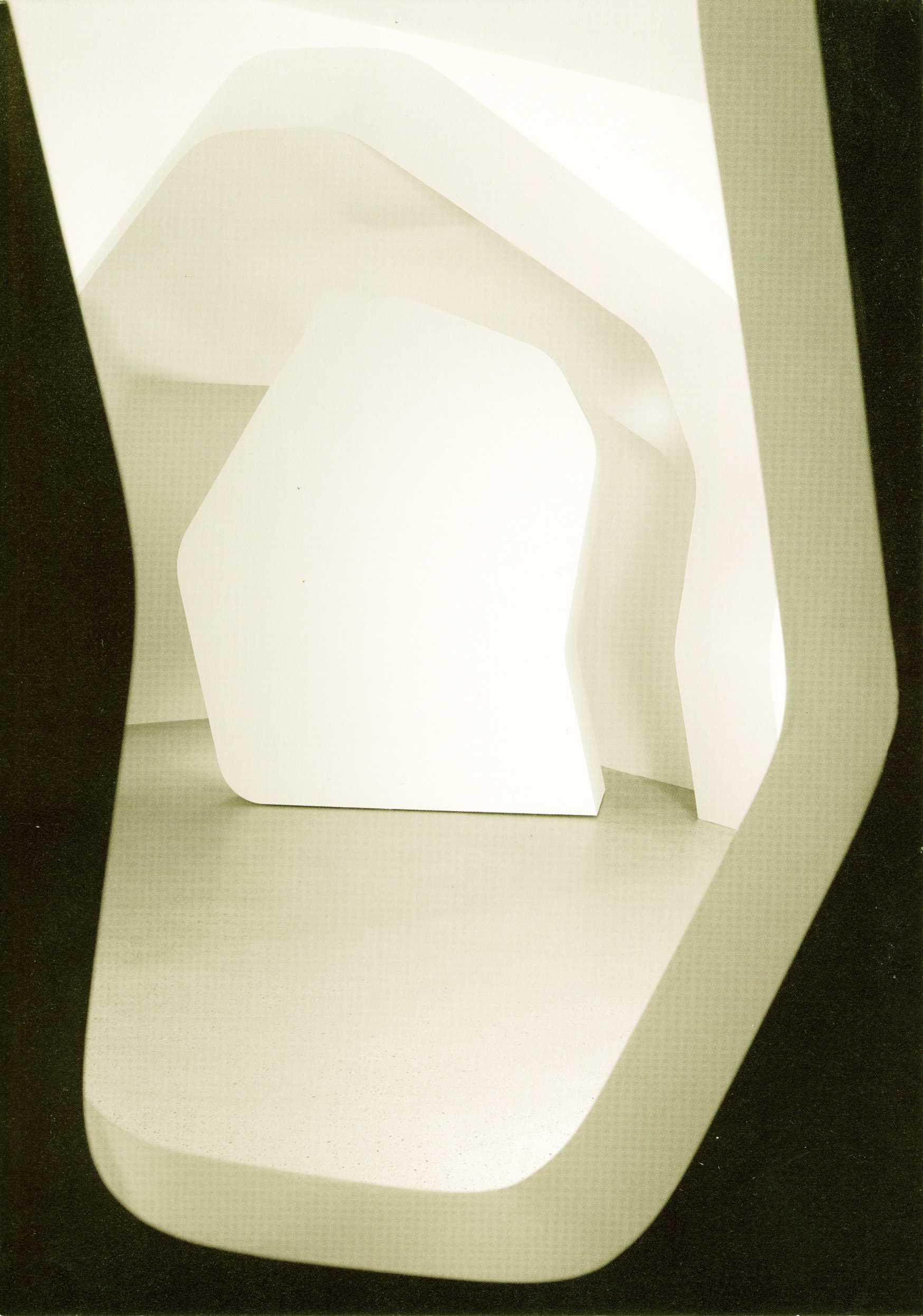