This year’s exhibition series Sheroes of Photography continues in its third iteration with a solo exhibition of works by Jitka Hanzlová. Sheroes of Photography I started the year with an overview of modernist women photographers. The second part followed in the summer with a solo show of works by Becher student Tata Ronkholz. And now, from October 8, Jitka Hanzlová’s most recent series, WATER, will be on view for the first time in Berlin. Throughout her prize-studded career since 1993, the artist has developed a poetic line of investigation, which she has continued with intuition and consistency over the decades. The transformative experiences of exile, seeing and photographing have become an act of approach and primary instruments of appropriation, understanding, and expression. Adam Budak, who curated her large show SILENCES in the National Gallery of Prague in 2019, wrote in the synonymous catalogue: “…(E)ach image seems to be a vehicle of silence. … Hanzlovás alchemy of silence belabours the world of critical intimacy which foregrounds the subject matter’s social, cultural and political sense of belonging. …” (Adam Budak, Jitka Hanzlová, Silences, Prague 2019, p. 197)
Hanzlová gained recognition in the mid 1990s with her works Rokytník(1990–1994) and Bewohner (Residents, 1994–1996). In her expanded portrait series, people and animals, city and country, nature and civilization oppose one another with equal standing, cautious yet intense encounters. Connections are forged. Contradictions become visible. Before the backdrop of civilization, the artist continually welcomes essential impulses from nature, such as in the compact cosmos in the series Forest (2005) and Vanitas (2008–2012) as well as in the animal energy in the series Horses (2007–2014). In her most recent series WATER (2013–2019) Hanzlová takes on the complex, ubiquitous element in its various aggregate states and appearances as well as its natural- and cultural-historical connotations. Water, formless and fleeting, arrives in chapters: UR, ICE, CLOUD, HUMAN LIGHT, HUMAN DARK, SILENT BLUE — from Ur-landscape to the urban, from algae-filled stream to seascape, from polar-cap icebergs to toxic remnants afloat in the ocean. The chapter UR suggests memories of organic-mineral substances. Water, plants, mud, earth, and time, conserved by photography, are mixed in tightly cropped images that do not divulge their origins in the visible world but rather allow for numerous associations. Just like clouds and streaming water, the brightly blue abstract surfaces in the chapter ICE are placeless: orientation and location recede to the background. In ancient ice, structural movement has become static. Just as New Objectivity photographers of the 1930s turned their gaze to the traces of wind and water in the sand, Hanzlová captures the movement of water in ice. Hanzlová’s work group CLOUDS affords great attention to the transient material of clouds, which fuse light and color, infinity and continual change. The time of day and change in weather orchestrate the series and sequences and lend them a filmic quality. American artist Alfred Stieglitz considered his cloud formations of the 1920s and 1930s “Equivalents” to his artistic philosophy and as genuinely photographic images. Hanzlová’s approach understands clouds as bodies without surfaces, as elemental and culturally situational appearances. The work groups HUMAN LIGHT and HUMAN DARK function together as cultural and emotional joints. Both link the ubiquity of the natural element of water with the manmade, the everyday, the civilizing, and nature. In HUMAN LIGHT, the various aggregate states come together to underscore water’s positive powers. HUMAN DARK on the other hand at first eludes definition. It opens up associative space for the the hidden and subconscious aspects of the life-sustaining element. It is in the ocean habitat, where living and lifeless material appears in the turquoise tides, that the urgent, present-day questions of our responsible interactions with living beings and resources become abruptly defined. The work group SILENT BLUE exhorts us to consider both the positive and the negative connotations of the world’s oceans, the beauty as well as the dangers threatening the entire ocean biotope. 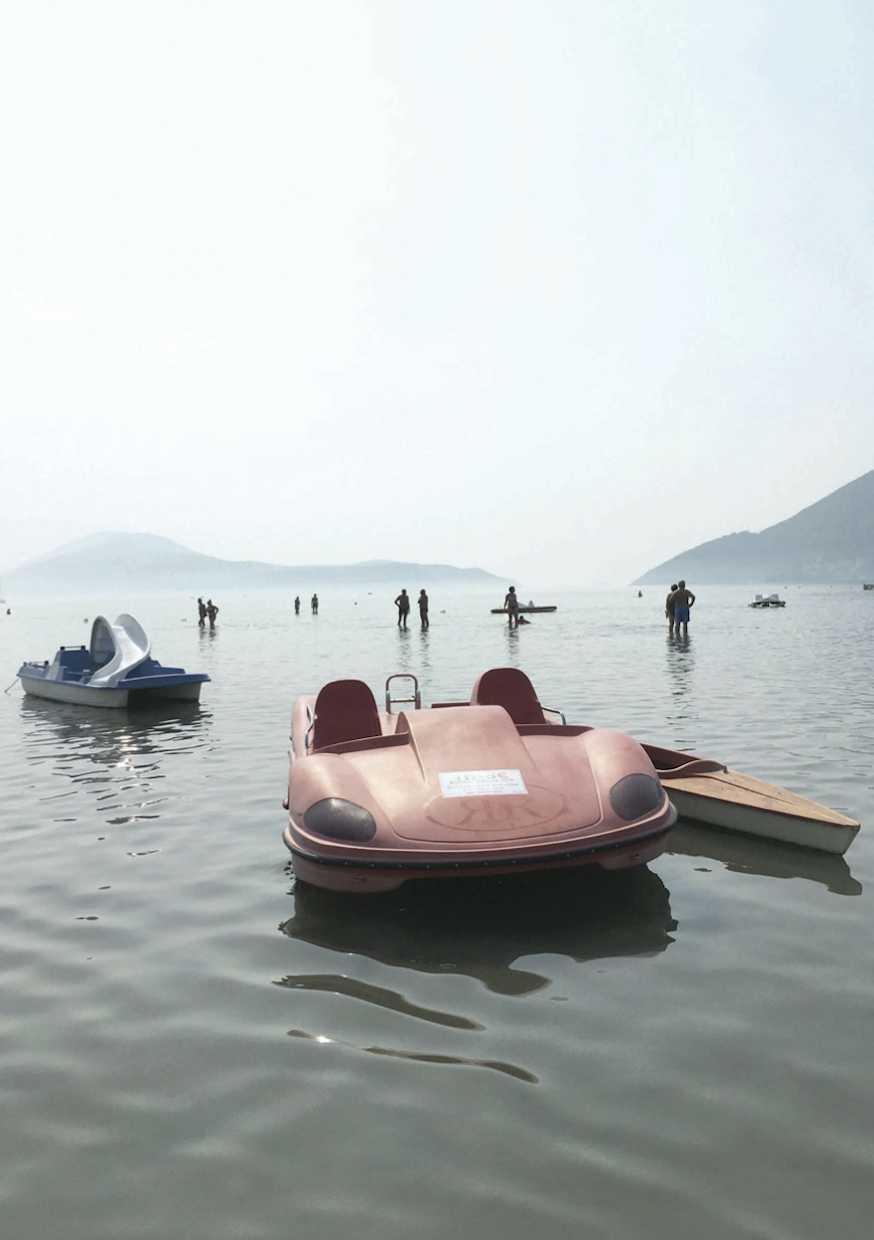